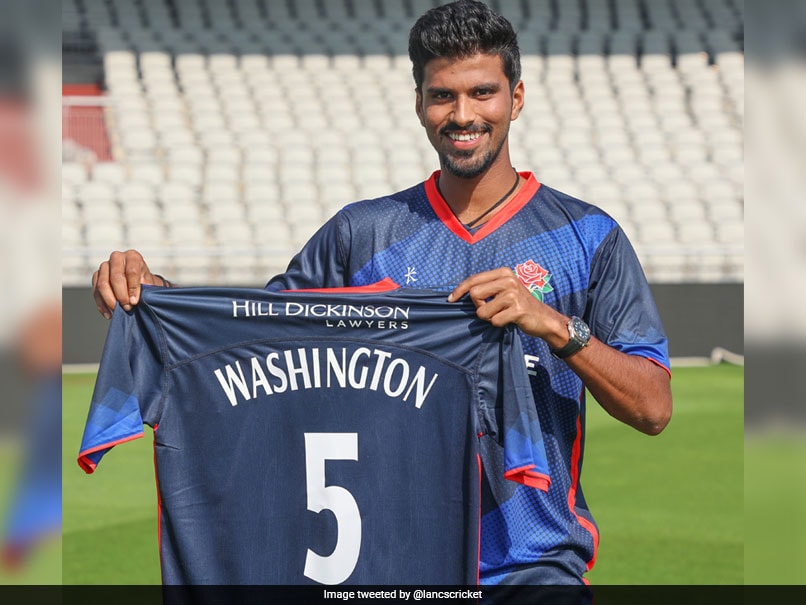 Washington Sundar opens up about playing for Lancashire© Twitter

Washington Sundar is looking forward to learn from the legendary James Anderson during his stint at Lancashire, a club he chose even while playing on his Playstation. With his upcoming stint at the English county side, the 22-year-old will be making his comeback in red-ball cricket since sustaining a finger injury in July last year. The injury sidelined him from India’s tour of England last year and also the second leg of the 2021 Indian Premier League.

“I remember playing with my Playstation and choosing Lancashire against most of the domestic teams here. It is great to be here and playing for Lancashire,” Washington said in an interview with the club’s official YouTube channel.

The young all-rounder added, “It has got some exciting talents and some experienced players. I am looking forward to sharing the dressing room with them and to sharing of knowledge about how cricket is played here.

“Most importantly, I look forward to winning a lot of games and making memories with all.” Washington said he loved to be Andrew Flintoff when playing video games. The Indian will be available for the full Royal London One-Day Cup competition and is also likely to play some County Championship games.

“I used to be Andrew Flintoff because he would give me four overs of solid pace and swing, and obviously he could come down at six or seven and tonk some huge sixes.

“Obviously, James Anderson is a legend, he can swing the ball both ways. Looking forward to seeing him here, seeing him bowl and how he goes about his things,” he said.

The all-rounder, who bowls off-spin and bats left-handed, has already represented India in all three formats and has also made over 50 appearances in the IPL.

In 2017, at the age of 18 years and 80 days, Washington became the youngest player to debut for India in T20Is and has since then made 31 appearances in the shortest format for his country – taking 25 wickets.

Topics mentioned in this article