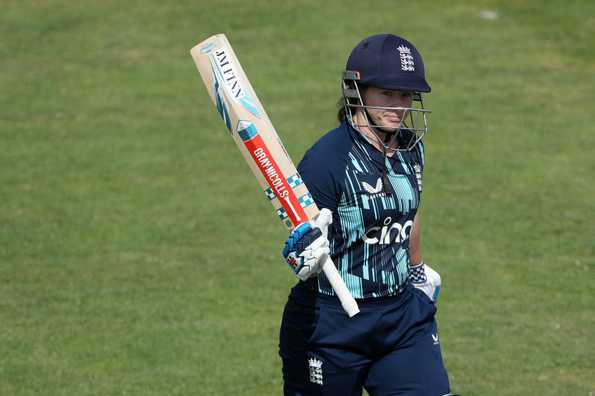 Tammy Beaumont starred with a sensational century to put behind the disappointment of not being picked for the Commonwealth Games in Birmingham as England Women romped to a 3-0 whitewash of South Africa. Beaumont’s 119 off 107 balls led England to a 109-run win in the third and final ODI in Leicester after they had notched up their fifth-highest ODI total of 371 for 7.

After asking England to bat on a wicket that assisted batting, South Africa couldn’t stem the flow of runs off the bats of Emma Lamb, Heather Knight and Sophia Dunkley, who scored half-centuries with the top four putting on substantial scores, whilst sharing as good partnerships. Beaumont struck 19 fours and a six in her outstanding innings. The real impetus though came from Danni Wyatt, who struck four fours and two sixes for a 14-ball 33 before falling in the 45th over with 322 on the board. South Africa had themselves to blame for the extra runs that they conceded with as many as 27, of which, 15 were wides and 4 no-balls.

Although South Africa got a strong start with a 61-run opening stand, they couldn’t capitalise on it, thanks to regular wickets with Charlotte Dean, Emma Lamb and Alice Davidson Richards returning three wickets apiece. They lost opener Andrie Steyn in the ninth over, and fellow opener Laura Wolvaardt fell soon after for a 51-ball 56. Marizanne Kapp (62 off 54) and Chloe Tryon (70 off 57) offered resistance and kept South Africa in the chase with a 110-run stand, but England hurt kept chipping in with timely wickets to restrict them to 262 in 45.4 overs in the end.

The win meant England swept the ODIs to take an overall 8-2 lead in the series, leaving South Africa to the three remaining T20Is to achieve parity.